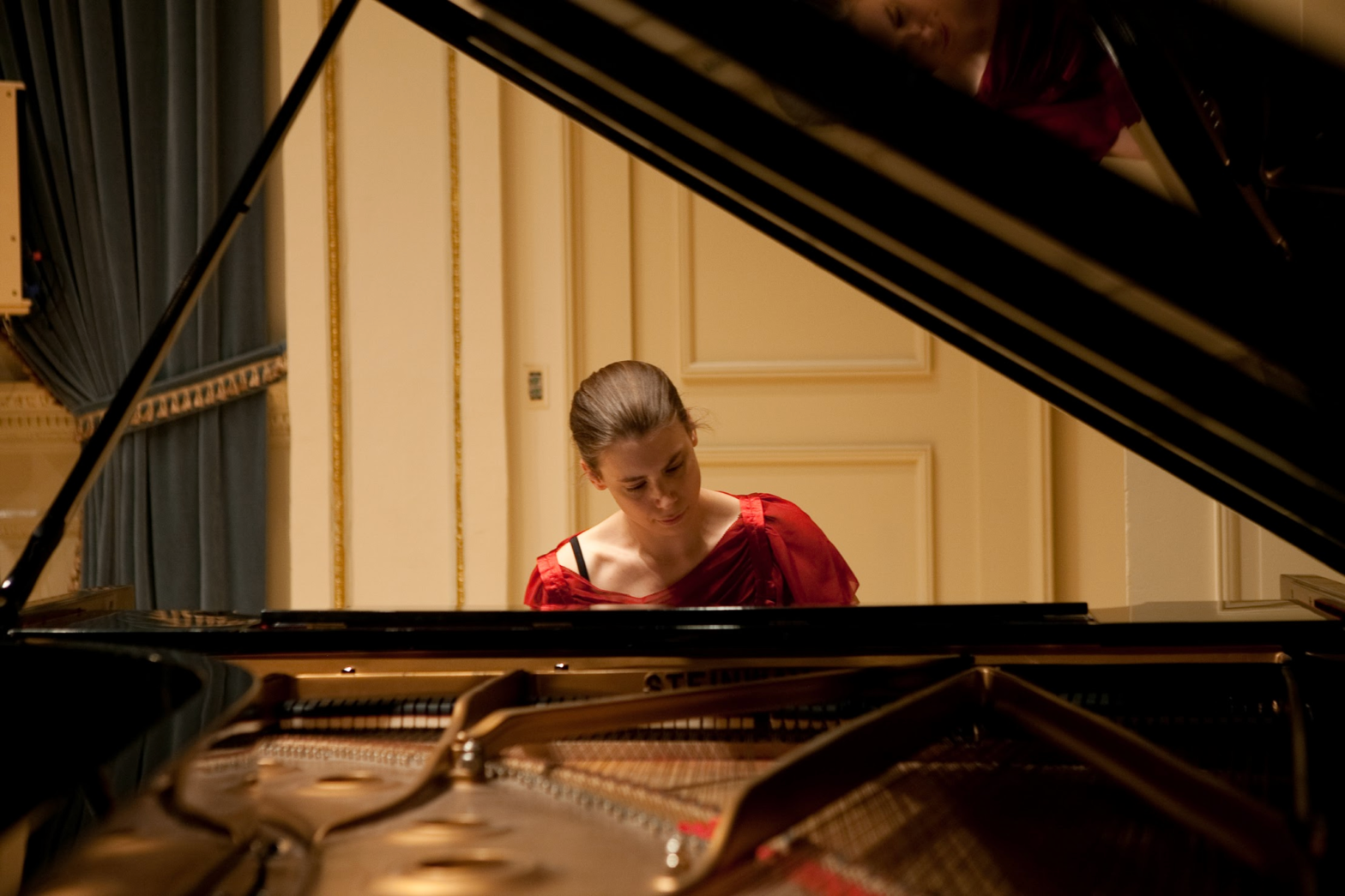 Camilla Köhnken was born in Bonn, Germany, and started playing the piano at the age of four. At the age of fifteen, she was accepted to Pierre-Laurent Aimard’s class at the Music Conservatory of Cologne. After six years of studying with Aimard, she went on to the Music Conservatory of Frankfurt/Main where she worked with Lev Natochenny and graduated in 2008 with distinction. The following two years, she moved to New York where she finished a »Professional Studies Diploma« under Jerome Rose on scholarships of the Bernhard-Scheuble-Stiftung and the DAAD.

2010 – 2018 she settled in Switzerland for the last part of her piano studies at the Music Conservatory of Basel with Claudio Martínez Mehner where she earned the »Soloist’s Diploma« as well as an MA in Instrumental Pedagogy. Through a project around Franz Liszt’s rarely played piano concerto  Malédiction with the kammerorchester Basel, she became fascinated by the music and pianism of Liszt and his circle so she started a doctorate on interpretation strategies of Liszt and his students as passed down in early sound recordings. In October of 2018, she defended her dissertation successfully at the University of Bern.

Camilla is leading an active concert career throughout Europe, the USA, and Israel. She played solo concerts in halls like the Carnegie Hall in New York or the Teatro La Fenice in Venice and was invited to music festivals like the Encuentro de Musicá y Academia de Santander in Spain, where she played besides her solo appearances with musicians like Wolfram Christ (viola) and Felix Renggli (flute). She also took part in the renowned International Musician’s Seminary Prussia Cove (UK), whereupon she was re-invited to play at the Open Chamber Music festival at the same location.

She is interested in the whole width of piano repertoire spanning from Bach to Boulez: For her interpretations of contemporary music she received several awards like the Lenzewski Preis (Frankfurt/Main) or the  Joseph Fidelman Award (New York). On the other hand, she worked for many years as pianist-in-residence (»Hauspianistin«) of the Beethovenhauses Bonn – Ludwig van Beethoven’s birthplace – where she played on a Conrad-Graf-Fortepiano of 1824 and is specializing increasingly in the music of the 19th century.

Chamber music constitutes also a very important part of her musical life. She curated e.g. an unusual chamber music evening at the German Consulate in New York. In Switzerland, she founded two ensembles: the duo “Ivory & Reed” with classical saxophonist Pedro Cámara with whom she released the album »… con alcune licenze« in 2015 (IBS Spain). Her second group is the “Philon Trio” with viola (Adam Newman, UK) and clarinet (David da Silva, Portugal). Their first CD with music by Max Bruch is going to be released soon with Analekta (Canada).

In November of 2019, she is going to start a postdoc position under Tom Beghin at the Orpheus Institute in Gent, Belgium, joining his research cluster »Declassifying the Classics. Rhetoric, Technology, and Performance 1750 – 1850«.

Beethoven’s glance into the future

“[… ] In C.K.’s artistic career the interest for avantgarde music was always equal with her involvement with the classcial-romantical repertoire. When she exposes links between Beethoven ans Ligeti it does not appear school- masterly but seems by chance to develop by mere chance. That also worked out so well because she interpreted between Beethoven’s sechs pieces (Bagatells op. 126) whose versatility she grasped with a great sense of sonorities and Ligeti’s energetically played eleven pieces (Musica Ricercata) also Edvard Grieg’s melancholic ballad in g minor op. 24. The dreamy atmosphere of this piece the young pianist rendered in a very subtle way. The final of the concert featured the Three Bulesques op. 8c by Béla Bartók. C.K. played with great passion which was paired by a remarkable technical precision. Lots of applause.”

“As soon as I had listened to the first chords of the ‘Dumky trio’ (Dvorak), played by C.K. (Bonn) and her outstanding colleagues, violinist Nicole Crespo (Getxo) and cellist Kian Soltani (Bregenz) I knew that I was about to hear a very interesting performance. Soon after it became clear that I was indeed present at a memorable performance of this masterwork which I heard from a new perspective, under a new light, and above all with an utterly unusual and unheard of degree of sensitivity […]”